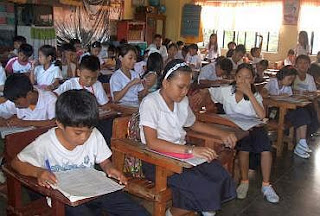 
Checkmyschool.org (CMS) was envisioned to be more than a web portal; it’s a social accountability monitoring tool—one that counts on the participation of Filipino citizens to address public education issues. To realize this fully, the program counts on community mobilization—which happens offline—as a vital component that runs parallel with the online web portal.

Six months after its formal launch, the province of Leyte in the Visayan islands, a project rollout site, has had two interesting cases of how CMS works. Two issues on school services were addressed through a proactive infomediary in the person of Mr. Paul Villanueva, a fresh college graduate. As a CMS infomediary, Paul served as the link between the schools in far-flung areas in Leyte and the checkmyschool.org to bring school and the community concerns to the attention of concerned government agencies, particularly the Department of Education.

The first story happened in Alangalang High School where the school building construction project was stopped without the prior knowledge of the principal. After the said principal sent feedback about the halted construction to CMS, the issue was addressed in a week’s time. The construction readily continued, with the contractor working overtime to prevent further delays.

In another case, the CMS infomediary reported that textbooks in Sta. Fe Central Elementary School were waterlogged and rendered unusable by a flood. The online report included photos to show the extent of the damage. Upon receiving this information, the CMS project management got in touch with a DepEd official to inquire if buffer stock is available to replenish the school’s books. The DepEd official replied in the same day, with a promise to coordinate with the DepEd Leyte division, as well as other neighboring divisions, for available stock.

The obvious value of the initiative exhibited in both cases is that feedback on education services—especially in a province far-removed from the national center—reaches the concerned public offices in a timely manner. But even before the feedback loop is closed through the help of ICT, there exists the efforts of the less-celebrated but equally important citizen volunteers that are working with CMS.

Admittedly, it was the CMS project management that facilitated the connection between the schools and the concerned DepEd units in both cases. The challenge then is to make the connection institutional and to expand the involvement of other communities. The potential of CMS to bridge school communities and DepEd will thrive if both stakeholder groups recognize checkmyschool.org as a citizens' feedback mechanism. There’s still a long way to go (CMS is contending with its own technical issues and all), but we're working towards that.
Posted by ANSA-EAP at 12:25 PM