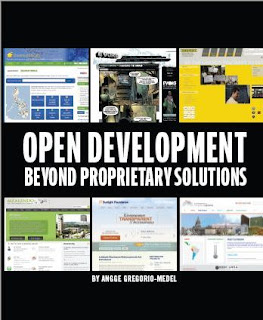 Information is power—this is not new—but information in the hands of activist citizen groups can determine the course of national development.

Information technology, the open source system in particular, has begun to revolutionize the people-centered development movement, contributing to a phenomenon called open development. The open source system enables citizens to access resources that used to be held only by experts in the form of knowledge and influence. The system breaks this proprietary hold on resources and “allows communities to work together and solve problems” (Irving Wladawsky-Berger. OSS Watch Team Blog).

Open development implies collaboration among networked individuals and communities. In the developing world, citizens and civil society groups are becoming co-creators of solutions, not passive recipients of assistance.

Participatory development has been with us since the 1970s but it has not evolved or grown. Open development, on the other hand, represents a paradigm shift. The objective remains essentially the same: to give citizens a voice in governance; but the strategy and methodology have changed significantly. Before, numbers were the source of power; thus mass mobilization was the key strategy. But it became clear that “crowding” was not enough, did not necessarily lead to sustainable change, and even tended to lead to anarchy. Now, not numbers, but information is the source of power to bring about sustainable change, and technology has allowed citizens to obtain crucial information and use it competently and effectively.

In the past, there was a greatly asymmetric relationship between state and nonstate—between government and people. Government oversaw state processes and actions, which often remained removed from the people. But the emergence of governance as a concept, in contrast to government, encompasses both state and nonstate actors, be they NGOs, CSOs, citizen groups, or the private sector.

In the past too, nonstate actors were primarily interested in gaining a voice: to be allowed to participate, to find a seat at the table. They also wanted to be allowed to innovate, and to test governance or reform models, such as participating in development planning.

Now, more and more, the demand is specific and direct: to make government accountable, to validate the performance of public machinery. This is only possible if citizen groups are privy to key information. Thus, government transparency and access to government information have become inherent requirements for nonstate actors to effectively work at making the duty bearers accountable.

THE CITIZEN AS SOUNDING BOARD

The current mindset of nonstate actors is not to supplant government but to help improve governance, perhaps as sources and validators of key information.

Specifically, this means monitoring and giving feedback to government, and making sure that government is responding to the needs of its stakeholders.

Especially in decentralized systems, feedback is the only way for the government to know that its services are being rendered effectively and efficiently on the ground, and reaching everyone, including those who are usually marginalized. Feedback should not only take the form of criticism but also contribute ideas on alternative ways of doing things. Feedback can come from citizens, public service delivery subcontractors, or groups that protest government inaction or misjudgment.

CO-EQUAL OWNERSHIP OF NATIONAL DEVELOPMENT
Governments use public consultations to involve nonstate actors in national development. But sometimes they are used as token participants merely for compliance, with no real engagement taking place.

Public consultations are often criticized for being expensive and obstructionist, and prolonging the decisionmaking process. But when properly conducted, they can produce higher quality regulations, more and better ideas, lower costs, more comprehensive concurrence and compliance, and responsiveness to change.

To result in better policy outcomes, consultations should include a range of stakeholders groups, otherwise, only those with time and money (usually the lobbyists) will be heard. Marginalized groups will not participate without community organizing and mobilization. It is also important to foster interest in the less contentious issues, which are often given short shrift.

To be effective, consultations must involve negotiations and consensus building.

In short, unless government actually takes the people’s views into account, national consultations will not contribute to open development.

Nonstate actors can play many roles in national development—as monitors, partners, subcontracted parties, and consultation participants. CSOs for example, have valuable knowledge that can improve development projects, provided that government is receptive to the value of multistakeholder partnerships and social accountability.

The Affiliated Network for Social Accountability in East Asia and the Pacific (ANSA-EAP) works with citizen groups, government champions, and other development partners to improve governance by applying the Social Accountability approach in Asia (see PDF). It advocates the active involvement of citizens in monitoring public finance management processes to ensure that the marginalized are part of the process and that the right information is presented in a friendly, clear, and simple way so that citizens understand it. This makes them real partners, and not just token participants. Stakeholder capacity building is a key component of our advocacy. Enabling stakeholders to understand and assess the issues and data helps put them on a par with government.


Angge Gregorio-Medel is Executive Director of the Affiliated Network for Social Accountability in East Asia and the Pacific (ANSA-EAP).  This article was first published in the September issue of Development Outreach Magazine, a publication of the World Bank Institute. It is featured in VOICES with the writer's permission. Click here to download the PDF (1.02MB) to view all images, graphs and additional information.
Posted by Roy C. Choco, FCD at 2:22 PM