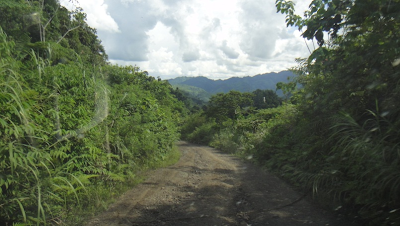 After traveling to what seems like an eternity to me, I caught myself thinking (in between power naps and a tiresome bobbing head movement) about the quality of school classrooms constructed in Patel, Davao del Norte that Tuesday morning of 15 May.  A one-lane path we were traversing that morning was long, winding, muddy, uneven, and had falling rocks on both embankments – proof  that a landslide recently occurred.  “Who in their right mind, would want to take on a construction job at Patel Elementary School?” was my initial thought.  “Did they manage to finish the task?” was a question that I would soon find out. 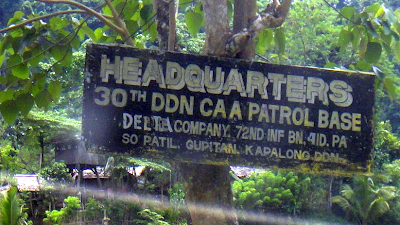 At the side of the road, a sign read that we were about to enter a Conflict Affected Area.  Still we moved forward.  Finally, after nearly two hours, we reached our destination.  Upon arrival, we were warmly greeted by Datu Laris, the Tribal Elder in that community.

I looked around and observed that I was among the poorest of the poor communities.  A sari-sari store selling sundries and snacks was situated across the school grounds.  It appeared to be the only store in the whole village.  Nipa houses surrounding Patel Elementary School seemed to have no access to electricity, all except one house at the end of the lane that had a generator to power the owner’s karaoke machine.  There were no carinderias (canteens) by the road side either.  There was however, a basketball half-court that probably serves a myriad functions – a multi-purpose area for informal gatherings and perhaps a solar dryer for the villager’s crops.

All these I was taking in while Principal Larry Ucol who formed part of the team explained the objective of the visit to Datu Laris.  He wanted to know whether the community can willingly render their time to participate in the Bantay Eskuwela initiative.  This meant conducting the beginning inventory and infrastructure monitoring of the 2-classroom school building currently under construction.  In agreement, Datu Laris gathered the community volunteers and met us in one of the newly constructed classrooms.

Shellie Manahan together with the BE Sulong Mindanao volunteers, and Engineer Ace began the orientation.  The community volunteers were a bit reserved but interested in what we had to say.  Renato Miguel of BE-Sulong Mindanao observed that language was a barrier since the local dialect was not Bisaya but lumad.  Mr. Miguel also noticed that once the monitoring forms were shown, the volunteers were a bit hesitant, with their gaze glued to the forms.  However, once these were set aside and spoke with them informally, the community responded eagerly.  While Engr. Ace walked them through it, the community volunteers were able to follow and accomplish the task. 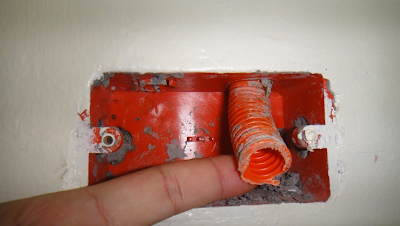 As an example, we pointed out that there were no electrical wirings installed inside the orange electrical hose while the Program of Works stated  otherwise.  Suddenly, tentative and small whispers became loud murmurs of objection!  They confided saying that the contractor requested community volunteers to pile up rock fillings on the school site in order prime it for construction.  The community worked for a whole week without pay because the contractor informed them that this component was not paid for by Department of Education.  The community, in their desire to have a newly constructed school building, rendered their service for free.  They were appalled to know that earthworks were included in the Program of Works, and that the contractors had exploited them. 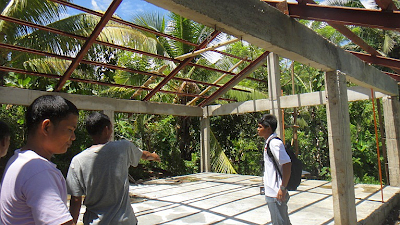 My eyes wandered at the far end of the newly constructed building and saw that another structure was soon to be erected in that community.  Concrete hollow block frames were erected, flooring cemented and steel trusses installed.  I asked the community members if that was part of the DepED construction.  They all said almost in unison, “naaa, sa DPWH yan…” (noo the construction is by the Department of Public Works and Highway). Datu Laris further expounded “classroom po yan…tapos na daw sabi ng DPWH kasi construction by phases daw sila..” (those are classrooms, according to the DPWH it's finished, they said the construction will be done in phases).  If this were true, then the project conducted by DPWH would be a classic example of splitting of contract.  “How on earth do you construct a classroom by phases?” I wondered.

I then focused my attention to the women in the community.  I asked the lady (who turned out to be the wife of the Datu) how many children she had.  She responded that she had four – the eldest graduating from college next year, the second graduating from high school next year, and two children who  are enrolled at Patel Elementary School.  She was thankful that we visited their community and was able to impart new knowledge in monitoring. She said that we were the first from the National Capital Region to visit their community and bring such an initiative.  For that, she kept thanking me. 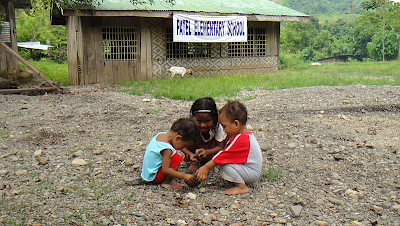 As I looked at the young innocent faces of the children playing in the front yard of the school, I was reminded why I was here.  Despite the distance and road conditions, Bantay Eskuwela would travel far and long so that we could serve the younger generation in their quest for better life and escape poverty.   The words of former Education Secretary Lapuz, “Edukasyon ang Solusyon” aptly described my sentiments.


Ms. Carole Belisario is the team leader of the Diaspora for Good Governance of the PH DESK of ANSA-EAP.
Posted by Roy C. Choco, FCD at 4:25 PM